Home Blog Monarchs on the Move! 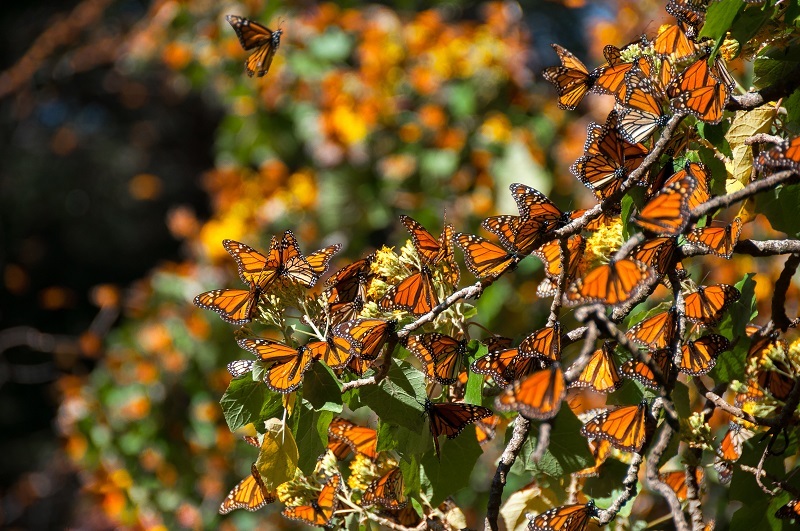 Monarchs on the Move!

…and although they’ve been in the news a lot lately, no, we don’t mean the crown-wearing folks across the pond. We are talking about monarch butterflies… and they are currently migrating! Each fall, scores of monarch butterflies here in Michigan and other points north sense the cooler temperatures and shorter days, and think, “Time to go to Mexico!” (We are guessing that many of you can relate). Of course, it’s not quite that simple… the monarchs that migrate south in the fall are actually not the same ones that came north this spring and summer. These butterflies belong to what is known as the super generation. So what does that mean?

Well, let’s zoom out and look at the entire migratory cycle. Each spring, thousands of miles from here in the mountain ranges of Central Mexico, a typical (AKA, not “super”) generation of monarchs hatch and begin to make the journey north. But, these regular generations only live 2-6 weeks, so this becomes a multi-generational journey. It’s actually the great-great grandchildren of the butterflies that started the migration who complete the epic journey and arrive in the northern U.S. and southern Canada. Fast-forward a few weeks, and the “Time to go to Mexico!” instinct kicks in. This triggers the female monarch to lay a special egg… an egg that will produce a butterfly that is very different from its predecessors. It lacks an age-inducing hormone that will allow it to live 8 times longer and fly 10 times farther than the previous typical generations. The super-generation!

So it’s this generation that makes the journey south, and overwinters in Central Mexico, where they live off stored energy in the fir forests for the next several months. Then, in the spring, their internal clock triggers a hormone that makes them become reproductive, they lay their eggs, and die. Those eggs hatch into a typical monarch generation, and the cycle begins again.

The super generation’s journey itself is pretty amazing. These feather-light creatures, with just a 3-4 inch wingspan, can cover up to 50 miles a day, flying as high as a mile up in the sky. They tend to travel migratory flyways along the shores of the Great Lakes, taking advantage of the winds and weather patterns for an extra push. Head out to the beaches right now, and you’ll see them! At night, and in bad weather, they will roost in trees along the way, which can make for a pretty awesome sight.

Monarch migration in Michigan lasts from late August through early October, peaking in September. You can find real-time migration maps, and submit your own monarch sightings to help researchers track migration patterns at JourneyNorth.org/monarchs. Seen any migrating monarchs? Snap a picture, post it on Facebook or Instagram, and tag us! #chikamingopenlands.