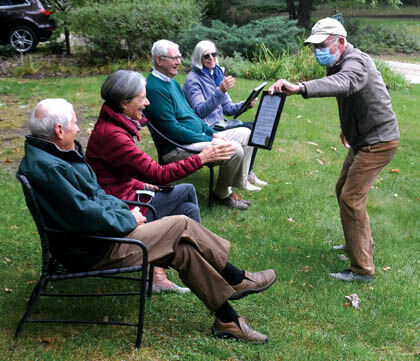 HARBERT — The founders of Chikaming Open Lands were honored on Oct. 3 with a car parade and the presentation of framed copies of a resolution passed by the COL Board of Directors.

Peter Van Nice, Jeannie Van Nice, Steve Smith and Jean Smith were the focus of the outdoor ceremony held near their homes in Harbert.

"It was only 20 years ago, in December of 1999, that COL was formally incorporated," said David Eblen, a member of the COL board.

Over the last 20 years, he said Chikaming Open Lands has become "a significant contributor to the health and the lifestyle of this community by preserving over 2,000 acres in perpetuity."

Since there was no Barn Benefit this year, Eblen said the land conservancy wanted to honor its founders in another way.

"We are truly indebted for the wonderful foundation that you established," he told them.

At the August COL Board meeting the following resolution "In Appreciation of the Founders of Chikaming Open Lands" was passed:

The following is a true and correct restatement of certain Resolutions duly adopted by consent of the Board of Directors (“the Board”) of Chikaming Open Lands (“COL”) at a meeting held on August 21, 2020.

WHEREAS, COL was founded in The Year 1999 by our esteemed forebears, Peter Van Nice, Jeannie Van Nice, Steve Smith, and Jean Smith ( the “Founders”); and

WHEREAS, in honor and celebration of the 20th anniversary of the founding of COL, the Board had embarked on planning a big shindig with lots of speeches, toasts, and stories (the “Shindig”) which would show the Founders that we still remembered and appreciated those who started COL; and

WHEREAS, the semi-formed Shindig plans of the Board, like so many other plans in 2020, were sent to pasture (or perhaps prairie) by COVID 19 (the “Pestilence”); and

WHEREAS, the Board did not want the Founders to think their contributions to the COL would go unPreserved due to the Pestilence; be it therefore

RESOLVED, that the Founders will be formally honored for their wonderful contributions to COL when the Pestilence goes the way of the non-native, invasive plants in a COL nature preserve, and

FURTHER RESOLVED, that this Board extends its boundless thanks to the Founders for planting, cultivating, and nurturing the 20-year old which is today’s COL.