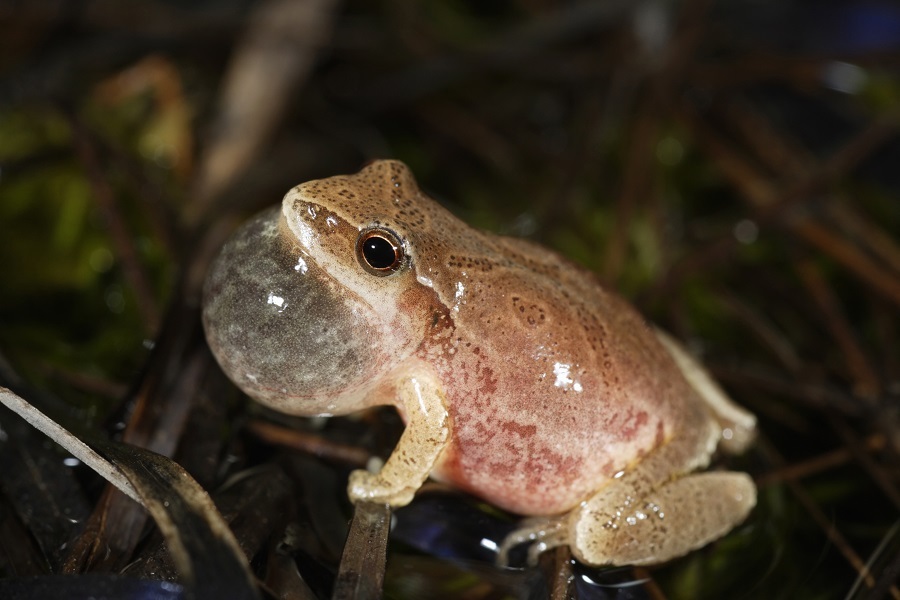 The Songs of Spring: Froggie Edition

For us, one of the most prevalent harbingers of spring is not the first robin sighting. It's this sound. At this time of year, you hear it emanating from every pond, creek, wetland, or plain old puddle you happen to be near. It's the sound of Spring Peepers, the teeny tiny frogs with the big, BIG voices.

What you are actually hearing are the male peepers, calling out to females to find a mate. And while they can be really loud (up to 104 decibels when calling in a group... which is comparable to a chainsaw!!), they are also really small- only about an inch long. This, and the fact that they are mostly active at night, makes them pretty difficult to spot. If you do see one, you can identify it by its brownish color and telltale "X" marking on its back.

There's a great article that methodically analyzed the Peepers' call, and determined that they consistently hit the same note... about 3,000 hz, which is equivalent to the the highest G on a piano. They make their distinctive sound by closing their mouths and nostrils, and forcing air from their lungs into their vocal sac, which is the bubble-like structure on their throats. It's the air rushing past the vocal chords and into the vocal sac, which acts as a resonator, that makes that seductive noise. Their call rate ranges from about 20-90 "peeps" per minute... and the faster the call, the better. Why? Because it takes a lot of energy to make all that noise, and a male that can chirp faster is advertising fitness and stamina to potential mates.

Another fun fact? Spring Peepers have an amazing tolerance to cold. No, we mean REALLY amazing. Peepers spend the winter hibernating in leaf debris and dead logs. When the temperature drops below freezing, the frogs freeze too... mostly. They produce a sort of "antifreeze" that prevents cell damage even though most of their bodies are frozen and their hearts have stopped beating. When things warm up again, they defrost and wake up. Pretty cool! Except they can't do this for too long... they can typically only survive in their frozen state for a couple of days to a week. So why not overwinter by burying themselves in mud where it's warmer like other frog species? Because then they can emerge earlier in the spring and get to their breeding grounds before potential predators have gotten their bearings.

So now that you have the 411 on Spring Peepers, can you find some? They are on the list for our #OutdoorDetective nature scavenger hunt. Check it out here!