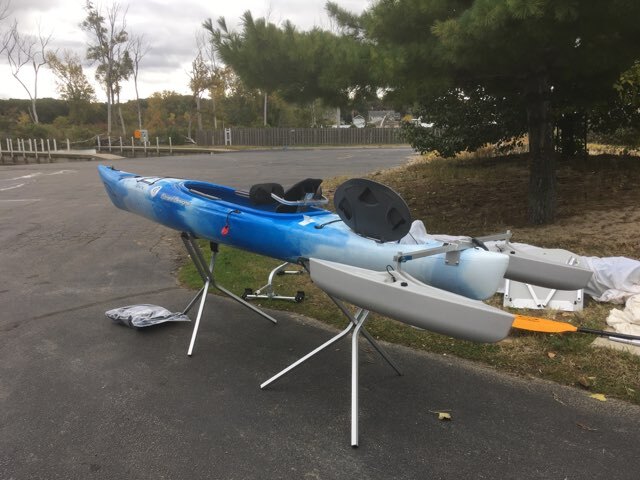 Chikaming Open Lands (COL) was the recipient of a $14,170 grant from The Pokagon Fund in support of the purchase of 12 kayaks for COL’s education and outreach programs. The grant was awarded in May of this year, enabling COL to purchase twelve kayaks, including two “Adaptive Kayaks” which are outfitted for use by individuals with physical disabilities, along with paddles, safety equipment, and a trailer to transport the fleet to and from launch sites.

“Some of our most popular programs are guided paddles on the Galien River,” said COL executive director Ryan Postema. “These outings expose participants to the rich biodiversity of the Galien River Marsh, which rivals the dunes and lakeshore as one of the true natural gems in the area.” Postema pointed out that prior to receiving the grant and purchasing the kayaks, COL needed to rely on participants owning their own kayaks, or renting them, which incurred a cost to COL or the participants.

The kayaks will also be useful for conducting habitat restoration and management activities, such as invasive species control and monitoring, which COL conducts in its two preserves, Louis J. Sima Great Lakes Marsh Preserve and Merganser Point Preserve, and throughout the larger Galien River Marsh, in partnership with Berrien County Parks and private landowners. With the dedicated equipment available, COL plans to offer more frequent educational paddle excursions for the community, including those with disabilities, at no cost to the participants. “This project is really a great expansion of the educational and recreational opportunities that are available in Harbor Country,” said the Fund’s executive director, Dan Petersen. “These kayaks will open up the Galien River and the very unique Great Lakes marsh to individuals that likely would not be able to experience them in a way that is so up close and hands-on. We are grateful for Chikaming Open Lands for bringing this programming to the whole community.”

Chikaming Open Lands is the local land conservancy dedicated to preserving the open spaces and natural rural character of southern Berrien County. COL works to protect and restore native plant and animal habitat, improve water quality, and permanently preserve ecologically significant forests, prairies and wetlands, as well as prime farmland and other open spaces in this area. COL serves nine townships in southwest Berrien County, and has been instrumental in preserving nearly 2,100 acres of open space since its founding in 1999.